What does a low float, a popular news story and a short squeeze equal? For starters, a 400% gain in a few weeks.

Beyond Meat (Nasdaq: BYND) is a recent entrant into the plant-based food market, and the company is growing exponentially. Profits for it are nowhere in sight right now, but Beyond Meat is trading at around 30 times projected sales for 2019.

As for potential competitors, Nestlé is coming out with a vegan “Awesome Burger” soon, and Impossible Foods’ “Impossible Burger” has already made its mark on the restaurant scene. It’s also worth mentioning some taste testers prefer the Impossible Burger over Beyond Meat’s burgers.

So what causes a stock like Beyond Meat to head to the stratosphere? 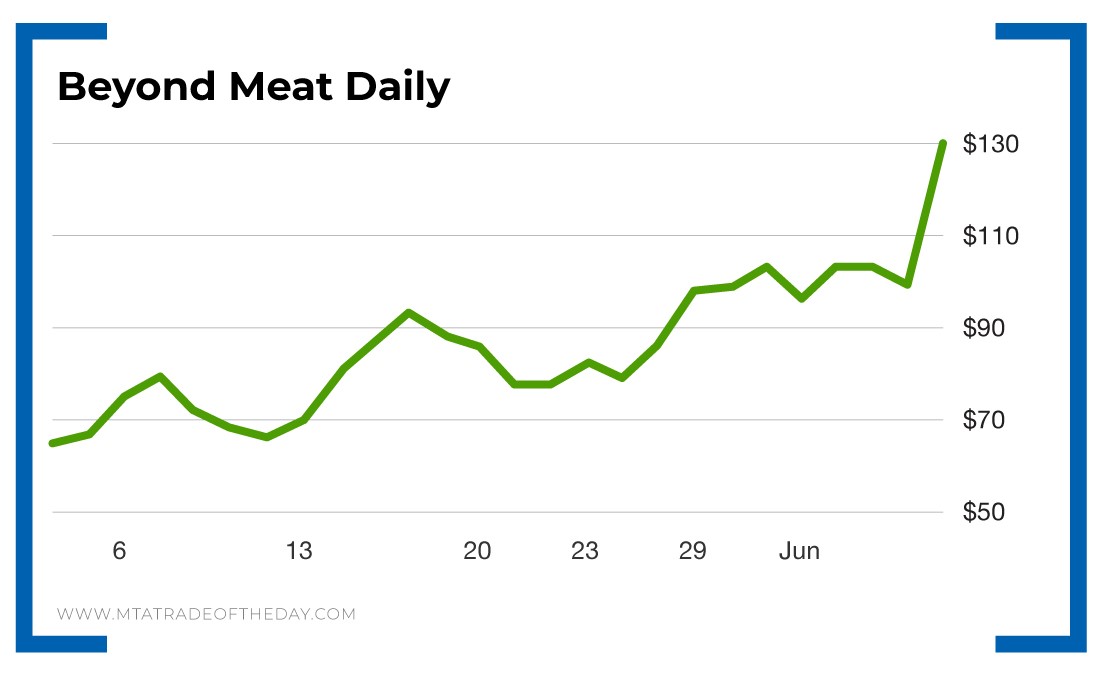 It’s a combination of two things: a small float and a short squeeze.

A float refers to the number of shares a company sells in its initial public offering. In the case of Beyond Meat, that number was really low. Because of the positive coverage and market excitement surrounding the company, there was a herd of people chasing a really low number of shares. That caused a nice price spike, attracting short sellers.

To explain the short squeeze, let’s think about this hypothetically. Short sellers could have bet that the stock was up on hype and would move lower, not higher.

They then sold borrowed stock into the market, betting they would be able to buy the shares back for lower prices to replace the stock they borrowed. As individual investors continued to buy, the shares moved even higher. Since it is a low float stock, it didn’t take much to send shares up.

As the shares moved up, the shorts got scared as they knew their losses could increase in a hurry. They started to panic, and that panic caused them to enter the market to buy back the shares they borrowed and limit their losses. That added to the buying, creating a short squeeze of enormous proportions that sent the stock even higher!

For investors, buying into hype stocks is not a great investment idea. As Beyond Meat will likely show, the market will “correct” the stock one day, and that speculative profit will disappear in a hurry. The question is, how much will the stock go up before that happens?

For traders in The War Room, trading Beyond Meat can be quite profitable…

“Bought the Beyond Meat $115 call yesterday. I got in at $3 and out at $15. Love earnings information from Karim every afternoon.” – Darrell M.

Action Plan: Even though Beyond Meat may be a poor longer-term investment, that doesn’t mean you can’t make money from trading it right now! Catch trading insight and potential trade recommendations surrounding Beyond Meat and other stocks daily in The War Room!