Let’s follow up on yesterday’s Trade of the Day…

If you recall, it was titled “Introducing the Cheapest Stock on the S&P 500.” In it, I made an argument for buying General Motors (NYSE: GM):

GM currently trades at 5.3 times forward earnings estimates, which makes it the cheapest stock in the S&P 500. At the same time, GM sells 100 times more cars than Tesla.

Markets tend to overreact. That’s why geopolitical surprises like this tend to get a ‘snapback’ effect. This pent-up aggression is why I like the idea of moving into longer-dated calls on GM – perhaps with a July or August expiration. To get our exact timing entry, we invite you to join The War Room today!

For those of you who joined us, you saw what happened today.

Just as predicted, we got the snapback rally that I forecasted. At the open, I told War Room members to move into the GM July $34 calls. We entered these calls for $1.48.

By lunchtime, shares of GM were roaring higher. Taking the “ring the register” approach, we sold these calls for just above $2, good for a quick and easy 34% winner. 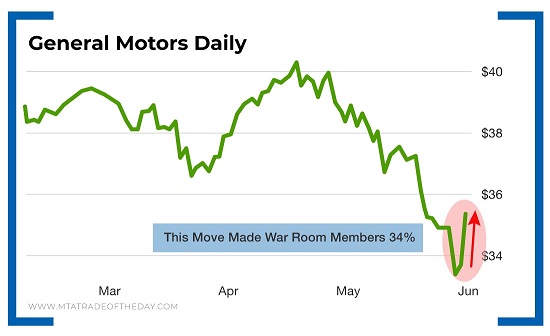 I’m bringing this to your attention today because it’s a crystal-clear example of why you need to be part of The War Room trading community if you aren’t already.

Perhaps you read my Trade of the Day yesterday – and maybe you bought some GM stock this morning. If so, you might’ve earned a 4% gain today. I admit, that’s not too bad. However, if you were in The War Room – and you received my instant, real-time trade alert this morning – this same GM move could’ve made you 35%.

This is a real-life example of the potential gains you could make with a War Room membership.

Action Plan: Yes, I still like GM. Yes, it still has room to move up. But with profits in hand, I always prefer to lock in the gains – and then look to reload a new call position on any pullbacks. In a volatile market, this strategy represents the safest and smartest tactical maneuver, which is why I executed it earlier today. Going forward, if you want to be alerted in real time when it’s time to move back into GM, the only way to do that is to join The War Room now! Don’t miss gains like this again!