How to Play an Earnings Strangle With Johnson & Johnson

In yesterday’s issue of Trade of the Day, I outlined all of the possible risks that the market is now facing from the so-called “Washington Risk.”

In other words, news out of Washington (specifically the current U.S.-China trade negotiations) now has 100% influence on the minute-by-minute movements of the major market averages.

As we have recently witnessed, any news item – or any tweet – can dramatically change the market’s direction – either up or down – in the blink of an eye.

For instance, Art Cashin – who has seen just about every major market move in the last five decades, warned us on CNBC:

October is known for its volatility – keep your seat belt fastened.

To me, you have the real possibility of the markets being up 300 or down 300 on any given morning – which is entirely dependent on the overnight news flow.

Given this situation, I asked this in yesterday’s Trade of the Day…

As traders, how should we play this?

But for today, I have a secondary strategy…

It’s something I call an earnings strangle.

You see, in The War Room, deploying our earnings strangle strategy during times of directional uncertainly is the perfect way to play large, volatile moves in either direction.

The method involves trading around a large, market-moving event – such as an earnings release. You’d own both a call – and a put – on the same company.

That way, you don’t care which direction a stock moves…

All you care about is the “delta,” or magnitude, of the move. As long as the stock move is large enough – either up or down – you’re positioned to profit.

A great example of this occurred this morning with Johnson & Johnson (NYSE: JNJ).

However, for War Room members…

This made the play cheap enough to enter for a very reasonable price.

Yesterday afternoon in The War Room, members paid a total of $2.18 for a combination of Johnson & Johnson calls and puts.

So we asked the question…

Could this be the report that kick-starts Johnson & Johnson – especially considering the litany of recent court verdicts going against them?

Or would this be another reason for investors to sell Johnson & Johnson and run for cover?

Honestly, it didn’t matter either way.

As long as Johnson & Johnson had enough movement in any direction, War Room members would cash in.

So here’s what happened…

This morning, the world’s largest drugmaker beat earnings expectations after announcing earnings per share (EPS) of $2.12. This beat the Wall Street estimate of $2.01.

The company also reported sales of $20.7 billion, which beat the FactSet consensus estimate of $20.1 billion.

And to top it off…

This news sparked a 3% upside move. Granted, this wasn’t as explosive as some other earnings moves – but for us, it was good enough. 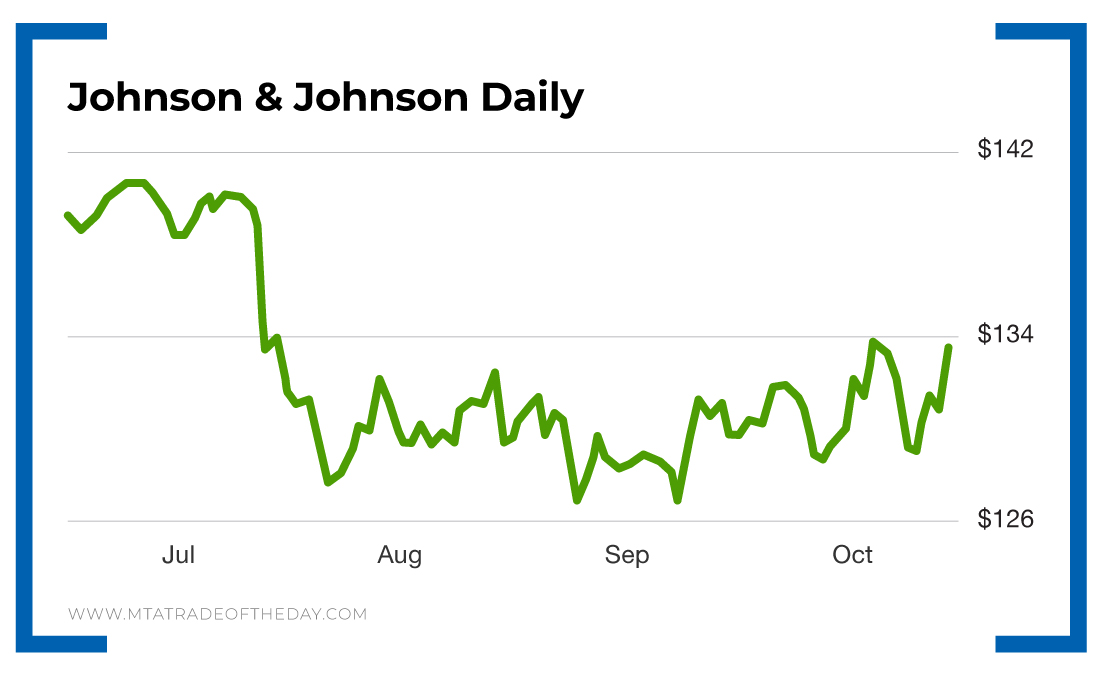 Action Plan: The combination of Johnson & Johnson calls and puts War Room members entered yesterday for $2.16 were sold today for around $2.66, good for a modest 23% gain overnight.

In a market where you don’t know which direction things will be moving when you wake up, that sort of trading consistency is critical in the midst of such extreme directional uncertainty. For more insight on how to profit from an earnings strangle, and much more, I invite you to join me in The War Room today!