You’ve seen the haunting images on the evening news…

The shocking aftereffects of the U.S. withdrawal has resulted in Taliban fighters now patrolling the streets of Kabul – putting the world in an uncertain position unlike ever before.

Nobody knows how this will all play out. And for that very reason, I believe it’s now time to get defensive.

The best way to accomplish this is by owning the iShares U.S. Aerospace & Defense ETF (CBOE: ITA).

For just more than $100 per share, you’ll own the very best U.S. equities in the aerospace and defense sector.

Here’s a breakdown of the top 10 holdings in the iShares U.S. Aerospace & Defense ETF:

In one shot, you get exposure to the world’s very best defense and aerospace companies.

Or a nuclear-powered submarine from General Dynamics…

You get it all. And if you look at the chart, you’ll see that you have a great entry opportunity. 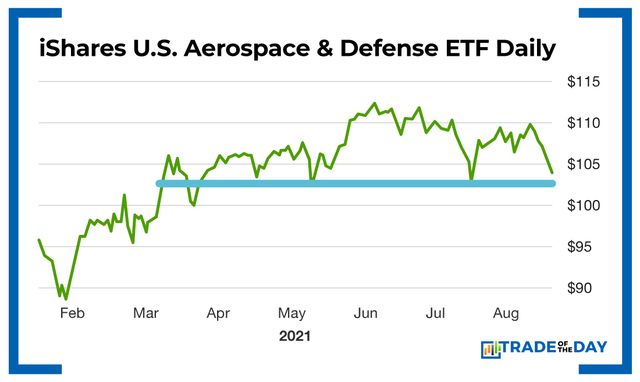 I gave you a clear buy signal above. But if you want to know exactly when to take profits, it’s time for you upgrade to Trade of the Day Plus. Get our top pick – delivered to you every Wednesday – along with our proprietary profit-taking system. Know exactly when to buy AND sell… with an 83% win rate. Upgrade your subscription today!