Opportunities like this one come around very rarely. In fact, this year, you may have only three of these opportunities and maybe none as big as this one.

On September 21, the Federal Open Market Committee will meet to deliver its verdict on interest rates.

The betting odds are for 75 basis points, but only the Fed knows for sure.

What I do know is that the size of the rate hike matters less than what the chairman of the Federal Reserve says. That’s right – what he says.

After the announcement at 2 p.m. ET, the Fed will announce the size of the hike. A few minutes after, Jay Powell, the chairman, will give his remarks and take questions.

That is when the fireworks usually start.

The market could soar, or it could tank. It could also do nothing, but that’s unlikely if history is any guide.

Odds are we will see volatility!

Here’s your chance to do a trade called a strangle. It’s one my partner, Bryan Bottarelli, does all the time around earnings. And I use it as well around big announcements.

When opening a strangle trade, you are betting both ways by using options. You buy a put option (betting the underlying security will go down), and at the same time, you buy a call option (betting it will go up).

The key is how much you pay. You have to expect that the move in one direction or the other is dramatic enough to cover the cost of both your options and more.

In this case, you would look to the S&P 500 or Nasdaq 100 options that expire on September 23, two days after the meeting.

You would balance the position by buying a put and a call on each ETF so that if you get a move higher or lower, you’re in the game.

Placing a one-way bet could mean a bigger payoff – but only if you get the direction right!

Playing a strangle allows you to win if you get a big move in either direction.

Action Plan: We may do such a play in The War Room the week of the announcement.

And we might enter it before if we want to see whether there will be an early arrival of the market’s jitters or euphoria. It’s the type of play we do over and over again. One member even used the gains from such a play to buy his daughter a car!

Fun Fact Friday: Institutional traders have been loading up on downside protection. As you can see below, during last week’s panic, hedging was three times more extreme than in 2008. Traders bought $8.1 billion worth of put options. They bought less than $1 billion worth of calls. Increased hedging from Wall Street could intensify market moves – as dealers dynamically hedge their short-gamma exposure. We’re prepared in The War Room with our Crash-Proof Asset. It cleans up when markets drop. Learn more here. 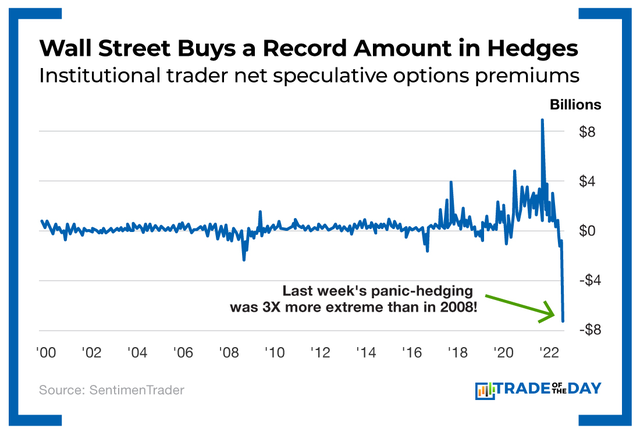