A few weeks ago, I recommended a company in The War Room called Anixa Biosciences (Nasdaq: ANIX).

It’s not a well-known company…

In fact, Anixa’s market cap isn’t even $150 million. It’s definitely not the type of company that meets my fundamental criteria for investing.

But it did have something going for it.

This was not the first time I’ve recommended Anixa, and something tells me it won’t be the last.

Both times I recommended buying Anixa, it was for the same reason. Insiders were buying shares in this little guy and doing it with some gusto – almost like they knew something was up.

After the first go-around, the company received a letter from the Food and Drug Administration (FDA) requesting more information on one of its processes. The stock tanked, but War Room members were already out of the trade.

Then, the insiders stepped in again. The FDA’s response was due at any time. I figured that the insiders were betting on the outcome being positive.

But before we even had a chance to find out, the company announced two solid pieces of news, which sent the shares higher. War Room members took some handsome profits in a very short period of time… but not for the reason I thought. 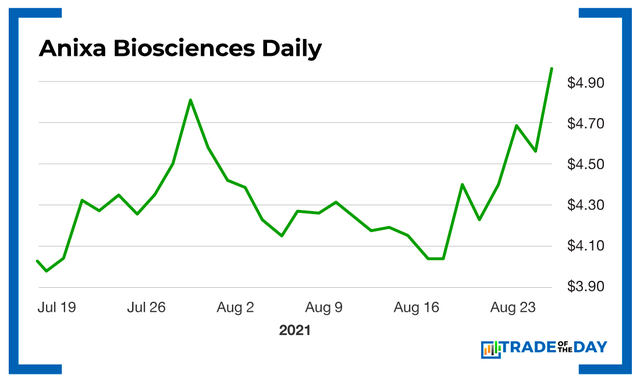 Here’s what some War Room members had to say…

Action Plan: Anixa will be back on the menu, but it will be at the right time and the right price. That’s our massive advantage in The War Room. We can react with lightning-fast speed in real time… and we do! Don’t miss your opportunity… Another round of Anixa profits may be in your future! But you’ll have to be in The War Room to take advantage. If you want 300 winners over the next year – guaranteed – join me here!