The world is in an energy quandary.

On the one hand, there’s a maniac threatening to destabilize the entire planet by invading his neighbor and wreaking havoc on the energy markets.

And on the other hand, there’s a country, the U.S., that has ample fossil fuels but wants to wean itself from carbon.

Winter is coming – for real!

There is a simple solution, but the world is currently opposed to this easy fix. There are a couple of reasons for this opposition – three good ones, actually – but attitudes are starting to thaw as the future becomes clearer.

Yep, you guessed it… The solution I’m talking about is nuclear power – did the reasons give it away?

Nuclear power is not going to disappear. In fact, it might be on the verge of a renaissance. It’s clean and cheap, and the technology needed to build plants is getting better every day. There is even a movement toward smaller, modular plants.

The Germans, who were in the process of decommissioning three plants after agreeing to import energy from Russia, are now debating keeping those plants operational.

The Japanese are going one step further.

Seems to me like the writing is on the wall.

So nuclear energy is coming back into vogue. How can you play it?

Well, the world’s biggest producers of uranium are a good place to start. The top four are Kazakhstan, Russia, Australia and Canada.

That doesn’t give us much choice.

It just so happens that the top play we can ride is Cameco (NYSE: CCJ), the largest producer of uranium in Canada (it’s already in the War Room portfolio). That’s one company that could cash in. It popped 10% on the Japan news, and it’s volatile. I would recommend entering a small position now and adding to it on big dips. 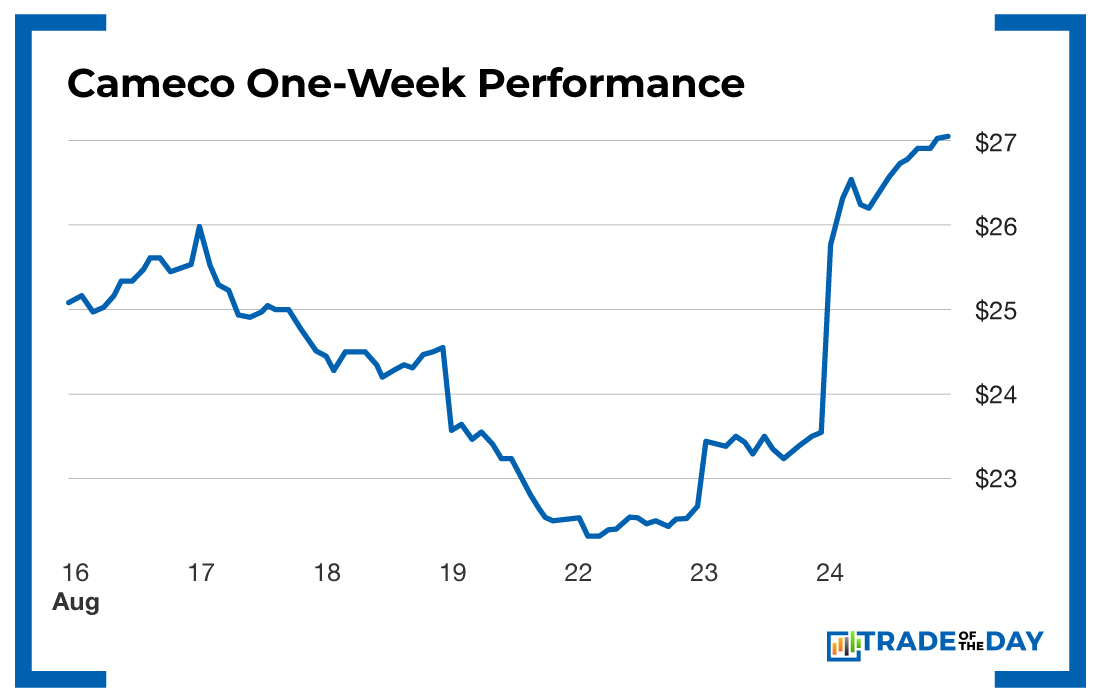 I have a second play for you too… but it’s a little more complicated. I will cover this under-$1 stock tomorrow.

Action Plan: Nuclear power is not going away. In fact, it’s getting more attention than ever, and I think it would be wise to get ahead of the curve. Cameco (NYSE: CCJ) can give you exposure to this energy trend before it blows up! Of course, you would already know about Cameco and own shares of it if you were a War Room member. Click here to learn how to join the best online community of traders in the world.