And without exaggeration, this might also be the most important Trade of the Day alert you’ve read all year.

You see, right now, water is becoming more valuable than ever before – and nobody even realizes it.

Water is becoming scarcer and scarcer by the day.

Just look at the recent news…

According to recent data from the U.S. Drought Monitor, we currently have drought conditions across 99% of the Western United States, up from 63% one year ago. In total, 59.2 million Americans are now living in drought-stricken areas.

As of July 31, the volume of water in California reservoirs stood at just 53% of its historical average.

And on August 17, the U.S. declared the first-ever water shortage at the Lake Mead reservoir, which is the largest in the U.S. In response, a total of 10 Western governors appealed for federal drought disaster aid.

It’s a crisis – and it’s getting worse by the day.

In response, water futures are blasting higher, and – amazingly – nobody even realizes it.

Case in point: On the Chicago Mercantile Exchange, water futures are up nearly 92% this year – to $936.22 per one-acre foot – and nobody that I’ve seen has covered it on the news.

If oil prices doubled, it would be a front-page story.

But water prices just doubled, and nobody said a word.

Of all the water plays available, my favorite is Invesco Global Water ETF. It’s an ETF that invests in businesses designed to conserve and purify water for homes, businesses and industries.

It’s up 21% this year, and its chart shows that it’s a model of consistency.

Check it out below. This ETF is moving at a 45-degree angle – straight up. 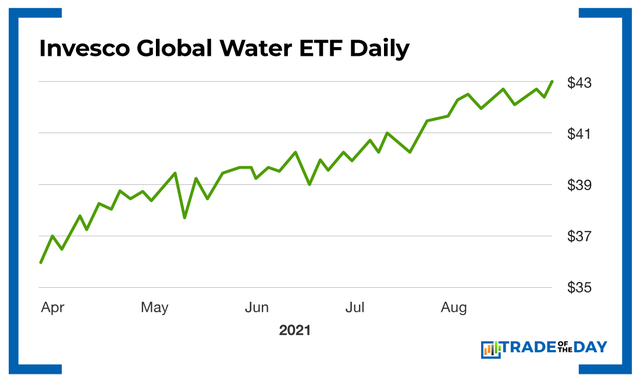 With one investment in Invesco Global Water ETF, you’ll own the top water stocks in the world. Here’s a look at its top holdings: 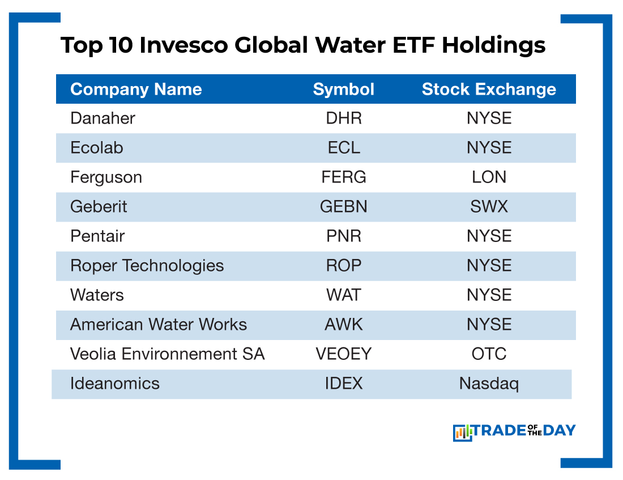 Action Plan: Droughts in California, historical lows in our country’s reservoirs and global warming all make the case for plays on water, which is our most precious resource. In addition, there are worsening supply and demand imbalances, unmistakable proof of climate change, and a hesitancy to address water conservation and desalination upgrades. Add it all up, and Invesco Global Water ETF looks like a stable and consistent way to profit off mankind’s most critical resource.

Want more picks like this – with entry and exit advice? Then you’re invited to level up and join Trade of the Day Plus right now. Join today, and I’ll guarantee that I beat my 83% accuracy rating.