As I mentioned yesterday, I have a second energy play for you today.

It trades for pennies, around $1, but it has a market cap of over $7 billion and a backlog of orders of over $70 billion.

A few years ago, it traded for close to $20 per share. So it’s not a stranger to higher prices.

A decade ago, this stock was riding high. It was the maker of the best aircraft engines and components for fighter jets.

It was also the biggest maker of engines for private jets and a top U.K. defense contractor.

What it didn’t do was build or sell cars. It sold its car brand to BMW.

The stock is trading for $1, and it’s going to get a new CEO on January 1.

It’s profitable again, and it has taken a chainsaw to many of its operations in order to rationalize the company after years of really bad luck (COVID-19 heavily affected its airline engine servicing program, which had accounted for 50% of profits)… plus really bad management and poor quality control.

Today, the company is arguably in its best shape in years thanks to several factors that are working in its favor.

And then there’s the company’s nuclear business.

It has developed a small modular reactor (SMR) that can scale to meet the needs of the customer.

Its factory-built model is entirely scalable.

This could be revolutionary for the industry, and it’s coming just in time to address the global energy crisis.

Paul Stein, the chairman of the company’s subsidiary focused on small modular reactors, told Reuters on April 19 that the company’s design should receive U.K. regulatory approval by mid-2024 and be able to produce grid power by 2029.

The government backed this stock’s $546 million funding round in November 2021 to develop the U.K.’s first SMR.

The U.K. government asked its nuclear regulator to start the approval process in March.

The company will meanwhile begin manufacturing those parts of the design that are least likely to change, Stein said. Each 470 megawatt electrical SMR unit costs $2.34 billion and would be built on a 10-acre site. The government earlier this month put nuclear power at the center of its energy strategy in response to climate concerns and a desire to exclude Russian gas.

In my opinion, it’s just a matter of time before nuclear becomes the go-to energy source for many countries that don’t have the ability to produce “clean energy” or can’t afford to do so.

Action Plan: Yesterday, I told you about a more stable play in Cameco, a uranium miner. Today, you are getting a more speculative long-term play on a company that was once a global technology leader. I’m calling this long-term speculative play The Last Great Value Stock. Right now, money is flowing back into stocks that drive the physical economy, and this company is at the forefront of many physical changes we’re seeing in transportation, national defense and renewable energy. The best part is that it’s trading for just under $1. Even if it was trading for $50, it’d still be cheap.

There’s no sign yet of a full-blown recession in the corporate world. Corporate margins hit a multidecade high last quarter. Make sure you consider this when the doom-and-gloom prophets are proclaiming that we’ve reached the end of days. 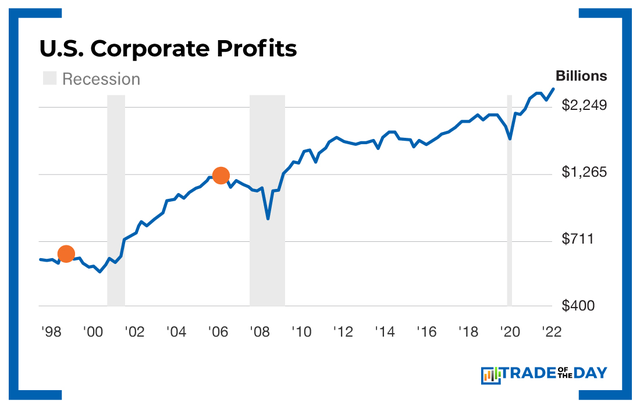