In the world of coffee, lightning can apparently strike twice.

And right now, it’s back in play.

Here’s what I mean…

So you have a company that’s outperforming in the midst of a multitude of pressures – including 40-year inflation highs, a recession risk, rising labor costs and unionization efforts.

Despite the risk of consumers pulling back on discretionary spending, “Starbies” (as my daughter calls it) continues to grow.

And in my view, the credit should go directly to interim CEO Howard Schultz.

I’m sure you know the story…

Inspired by a 1983 trip to Italy, where he learned that Milan alone had over 1,500 coffeehouses, Schultz envisioned a similar coffeehouse expansion in the U.S. And soon enough, that vision turned into Starbucks.

He stepped down as CEO in 2000. But on March 16, then-current CEO Kevin Johnson announced his retirement – and Shultz stepped back in.

In the short time since then, Schultz has indicated that the coffee chain’s customers haven’t pulled back on their spending or traded down to cheaper items, despite persistently hot inflation.

Speaking from personal experience, this is most certainly true. It seems like my family’s Starbucks orders only get larger – and more and more expensive – with each passing day.

Shultz said, “We have clear line-of-sight on what we need to do to reinvent the company, elevate our partner and customer experiences and drive accelerated, profitable growth all around the world.”

On June 3, the company reopened the Starbucks Reserve Roastery in Shanghai. It has since reopened nearly 900 stores in Shanghai (which is home to the most Starbucks stores in the world). 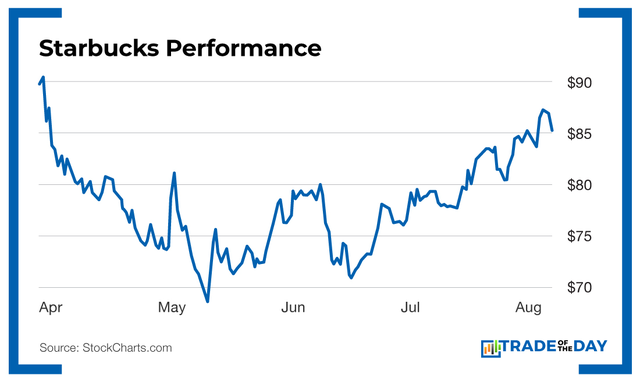 Action Plan: Since setting a double bottom at $72, shares of Starbucks have been on the rise. Schultz has gotten the company back on track, and it has opened 318 new stores under his leadership. Starbucks now has 34,948 stores globally, which should be enough to keep shares moving upward. Buy the stock now, before it moves up to $100.

Those who invest while stocks are trading at a discount in this bear market will be really happy they did in the long term. Last week in The War Room, we made eight trades, and six of them were winners. We’re currently guaranteeing 322 winning trades for each member in their first 12 months.